A family-owned estate, two brothers in Cramant, Clément and Antoine. One would think our destiny was written in advance… but it was in the beautiful, scent-filled garrigue of Provence that we spent our childhood.

One day we realized that taking over the estate was what we needed to do. Clément was the first to come back, driven by an irresistible need for independence and connection with nature. Antoine joined him, excited by the idea of living this entrepreneurial adventure with his brother.

After following separate career paths for several years, this was a project to work on together.

Brotherly unity is our strength and the complementarity of our personalities ensures that it will last. Clément the idealist embodies the land and the roots of the estate. Antoine the rational deals with development and opening up to the outside world.

Together we share the same vision of a winegrower’s job: our everyday work is an extension of Nature and of ourselves, we do it to breathe a soul into a living product.

Our work transcends us. Over and above our own beliefs, we are working for future generations. It is our responsibility to pass on this fragile, precious heritage.

We are perpetuating the family
heritage, imbuing it with our sensitivity

Before being the story of two brothers, Pertois-Lebrun is that of several generations of men and women winegrowers and champagne makers, who have been closely linked to the Côte des Blancs since the beginning of the 1900s. We owe to them what we are today.

The story of Pertois-Lebrun Champagne really began in 1955 with our grandparents Paul Pertois, a winegrower in Cramant, and Françoise Lebrun, a winegrower in Mesnil-sur-Oger. They were the founders of our family winery and it was one of their three daughters, Odile, who took over running it.

We two brothers, Clément and Antoine, were the sole potential representatives of the 5th generation of winegrowers … but we grew up in Provence! Our future in Champagne was far from being planned in advance.
And yet, not wanting to see the family estate disappear, it was our responsibility to come to Champagne to take it over.

Clément, who had always been a nature lover, close to the land and growing things, was the first to come and join his aunt Odile in 2004, with a clear vision of what a winegrower’s work should be: to recreate the value of the terroir and reveal the wines’ identity.
His younger brother, Antoine, decided to come on board in 2013 after leaving his professional career as a consultant in Paris. Attracted by this great entrepreneurial and brotherly adventure, he devoted himself to managing the estate to create new impetus.

Today our motivation and our commitment are still as true: we are perpetuating the family heritage, imbuing it with our sensitivity and offering you the result of work done by two brothers and several lives, Champagne Pertois-Lebrun.

Cramant, Le Mesnil-Sur-Oger, Chouilly, Oger, Oiry… five villages classed as Grand Cru in the prestigious Côte des Blancs, the favoured chardonnay region. These are also the five villages within which our 9.5-hectare vineyard is spread.

We approach work on the vines with respect and humility, and always with the greatest care. Our ambition is to express all the finesse and elegance of chardonnay, as well as revealing the variety and individuality of our 44 plots, representing a real mosaic of terroirs, each with their own separate identity.

To achieve this we use eco-responsible winegrowing techniques, giving priority to the life of the plant and the microbiological composition of our soils, whilst voluntarily reducing the vigour and yields of our vines.

This means that we restrict the use of synthetic products as far as possible, preferring instead to use biological treatments and aromatherapy, naturally produced soil conditioners and plant decoctions to strengthen the vine’s natural defences. Insecticides and herbicides are banished; we work our soils mechanically, encouraging natural grass and weed growing.
With this approach the root network penetrates deeper into the sub-soil to extract its quintessence.
This range of practices is naturally reflected in the quality of our grapes, an indispensable factor for wines that express all the aromatic nuances and frank minerality of their terroirs of origin.

In recompense of our efforts, our vineyard has been certified Haute Valeur Environnementale and Viticulture Durable en Champagne (High Environmental Quality and Sustainable Winegrowing in Champagne) since 2019.

We intervene as little as possible, in order to preserve
the individual soul and identity of our wines

It all starts with the grape harvest! Listening to both the vineyard and the elements we adapt to every vintage. Nature dictates the ideal timetable and harvesting route for optimal maturity and aromatic expression of the grapes.

As far as possible during pressing we separate the juices of each plot for greater precision and a better understanding of our terroirs. The cuvees, or first pressing juices, are preferred for their purity and concentration of sugar and acids.

In our search for authenticity we intervene in the work of the wines as little as possible, in order to preserve their individual soul and identity. This is why the wines undergo nine months of maturation on fine lees, without filtering or fining. With the usage of a variety of containers, such as stainless steel, concrete or stoneware tanks or oak barrels, the wines reveal various facets of their personality.

After bottling, the work done by time is essential to ensure that our blanc de blancs can find their equilibrium and reveal their potential; patience is important here… So our cellars are home to our precious wines for ageing on lees for at least four years and for up to eight years for our most prestigious cuvees. 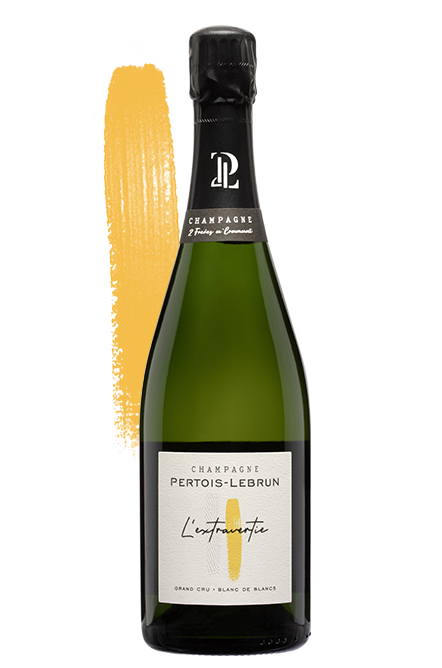 GRAND CRU • BLANC DE BLANCS
(100% chardonnay)
Lively and expressive, it reflects our know-how and all the finesse of chardonnay. A spirited champagne par excellence, combining freshness and elegance with exemplary maturity after ageing for four years. An invitation to a moment of pleasure and discovery.

Enjoy this cuvee as an aperitif with delicate, simply flavoured delicious appetizers, both from the sea (prawns, oysters) and land (shredded Italian ham) or with firm, fruity cheeses.

GRAND CRU • BLANC DE BLANCS
(100% chardonnay)
Intense by nature, it highlights the diversity of terroirs and harvest years, which give it equilibrium, structure and aromatic complexity. A passionate cuvee that successfully combines the radiance of chardonnay and the maturity of the great wines of Champagne. 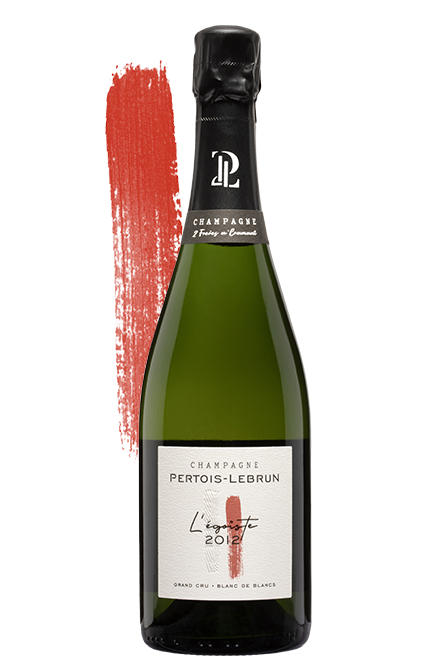 GRAND CRU • BLANC DE BLANCS
(100% chardonnay)
The reflection of a unique, singular year it has a stated temperament that reveals all the fullness and elegance of a great Blanc de Blancs, after a minimum of slow six years’ ageing in our cellars. An excellent cuvee that illustrates precisely the nature of its terroir of origin, the Côte des Blancs.

Very winey whilst retaining its champagne elegance, it will enhance any seafood or shellfish meal (langoustine tails, crab, gambas), as well as certain well-matured cheeses such as old Comté, Cheddar, Beaufort or Fourme d’Ambert.

Technical sheet
Les Fidèles
Our “Les Fidèles” range began with an ambition… and with daring: we wanted to reveal the identity of our vineyard’s best plots through a selection of exceptional cuvees, each highlighting:
- a single location classed as Grand Cru in the Côte des Blancs
- a single grape variety, chardonnay
- a single year’s harvest, revealing the specific nature of the vintage

To magnify the terroir “Les Fidèles” benefit from an extended ageing period of at least five years on lees to achieve plenitude of flavours, and have a very low sugar dosage, synonymous with purity and authenticity.
Ideal as an aperitif to appreciate their natural freshness and all the subtleness of their flavours, these champagnes also prove to be real gastronomy wines, offering maturity and complexity to sublimate your culinary experiences.

These are champagnes of excellence both for connoisseurs seeking rare and unique cuvees and amateurs curious to discover the hidden treasures of the Côte des Blancs.
Le Fond du Bateau N°12Derrière le Mont Aigu N°12

CHOUILLY GRAND CRU • BLANC DE BLANCS
(100% chardonnay)
This first cuvee in our “Les Fidèles” range comes from the place of the same name, located at the southern tip of the Grand Cru classed vineyard of Chouilly. It is produced from a single 1.44-hectare plot where the old chardonnay vines date back 50 years on average and were planted by our grandfather Paul Pertois. Its terroir of origin, marked by a limestone-silt soil on the Senonian chalky sub-soil (Upper Cretaceous period, Secondary Era), is revealed through a remarkable balance between power and finesse, aromatic generosity and tender minerality.

Enjoy this cuvee to the full with fattened chicken in cream, bass and crayfish stew with champagne sauce, a piece of salmon cooked simply over a wood fire or even a slightly spicy Thai or Indian dish. Well-matured Cantal cheese, parmesan or ewe’s milk cheese would also be ideal. 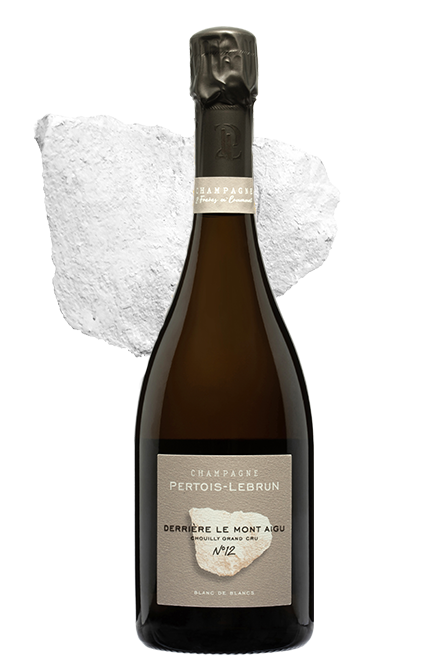 CHOUILLY GRAND CRU • BLANC DE BLANCS
(100% chardonnay)
With this second single-vineyard cuvee we wanted to highlight the diversity that can be obtained from a single cru, that of Chouilly. Our grandfather planted this 0.59-hectare plot in 1955 in the place known as “Derrière le Mont Aigu”, just 500 metres from the “Fond du Bateau”. Yet the cuvee produced from it has its own distinct identity, the reflection of a unique terroir: it is located at the bottom of a slope, facing south, and the structure of the silt soil on Senonian chalky sub-soil (Upper Cretaceous period, Secondary Era) gives this champagne an extremely elegant mineral and saline depth, together with remarkable aromatic purity.

Enjoy this cuvee with fish and seafood, pairing it with aiguillettes of John Dory with creamy Chaource cheese in hazelnut oil, scallop carpaccio, “fleur de sel” and Granny Smith’s apple mousse, a simple salmon tartare with dill or a fillet of bass with shellfish in coconut milk.

Please come and visit us
next time you are in Champagne!
By appointment only,
Monday to Friday, 9am-12 noon and 2pm to 6pm.

Sales at the estate and shipments to France and abroad.